skip to main | skip to sidebar

Chandra Bhaga silver moon in you is reflected 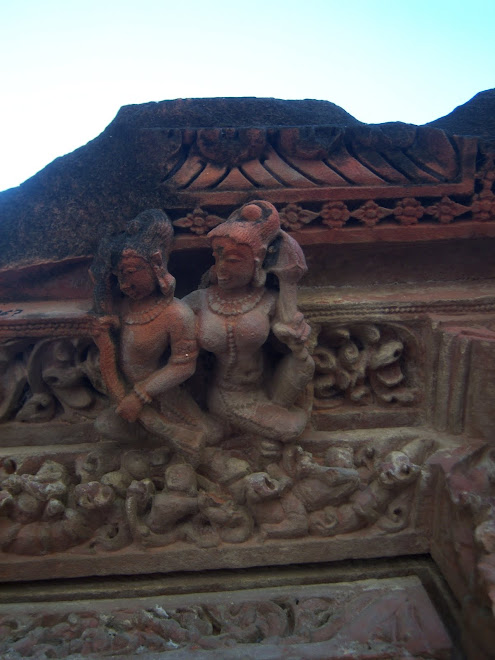 I do not know what to say now but I will come to you when the muse holds me in her inspiring arms!! 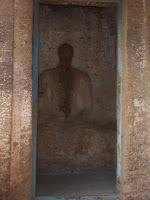 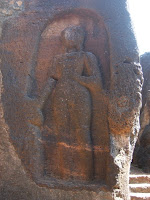 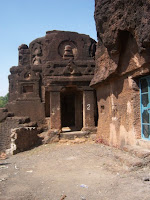 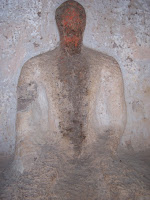 Buddha--kolvi
The time as I said earlier is a snail in Jhalawar. You may arrive as a stranger but you will go back as family and friend is the culture and the sweetness of Jhalawaris. Kush Sherma whose great help to see the exiquisite art in Garh Palace I have already mentioned suggested to me take an early morning bus to Dag to enable me to visit Buddhist Kolvi Caves. I took a bus 6AM (Jhalawar to Banswara) from near the Rajasthan Tourism Office in Jhalawar. The bus drove through small villages, taking passengers, there were a lot of sheep on the road and colourful women shepherd in their exotic jewelery saw to it that no ewe is left behind, the sheep dog also worked hard to maintain order in flock. Some tribal women got on to the bus and their red and blue skirts and mirror work on shirts and armful of white bangles were distinct. it was about 95 kms. to Kolvi. The bus left me on the road and went on further to Dag another 10 kms from kolvi. I walked on a fine tarred road arrived in open country and small settlements. A water pond had women come down to wash clothes while the cattle cooled in the water.
Walking about 3 kms i arrived near a small hillock. I noticed ASI board about Kolvi caves. i went up the hill and there was total silence only the sound of wind. the foliage swayed in wind and I could see far the sun burnt landscape. At leisure I explored the caves 35 of which still remain out a more than 50. The weathering by elements has destroyed the sutpas and Chaityas. the caves had the stone bed for the monks to sleep on. from the doors of caves which mostly opened to the valley bellow it would have been a stupendous view of forests, and wilderness more than 1500 hundred years before. the vegetation might have been different 1500 years before. the monks must have had fruits from the trees in the forest and food brought from villages. I could feel the presence of monks their discussions on Dhamma and their simple spiritual lives.
I understand that these caves continued in use till at least 12th century which speaks for the popularity of Buddhism in the area. There was a giant sized standing Buddha sculpture and many in meditative posture. erosion has taken its toll but still the place gave me a feeling of peace and a distance from the world of humans into serene nature. in one of the caves someone has put an idol and i could feel that locals visit and worship. So in India nothing dies, faith keeps alive 1500 years after the monks prayed for Nirvana. i spent quite many hours in this little hill of peace. had a banana and few biscuits and washed them down with a couple of swigs of water from the bottle. I walked back the women and men worked their farms, tethered the oxen to the carts and children played and ran around in joy. Soon another bus appeared and I went to Dag a small dusty town. I took some mango drink and walked around. Farmers brought grains and lentils to sell in the shops. People shopped for shoes and clothes, utensils and groceries. This was my India not the CFL powered glitter of big cities but the sinewy, hardy, sturdy farmers' world of simplicity and modest desires. The honest toil visible on the faces of men with their dauntingly large mustaches and bright headgear the women elegant in their bronzed faces from honest and hard labour in fields and at home.
Note-- take water and food with you for in Kolvi there is nothing. Have a sun hat while you walk up to the caves in strong tropical sun. Travel by the local bus you will learn more about people and culture. Near Dag are more caves if you would like to visit
Posted by artblog at 9:48 AM